What Happens When Confidence Falls Apart?

There are intriguing interconnections between the election, the virus, and the markets.

While we may never know how deep and wide the political elites’ effort to gain control over our government goes, it appears to be vast. Although it’s still unknown whether fraud altered the overall election outcome, the evidence of fraud is real.

Corrupt poll workers and election officials have been identified in numerous locations along with voting machine “glitches.” Some judges seem to be ignoring evidence while affirming Joe Biden’s victory.

All the while, the corporate media plus the major social media platforms are working overtime to convince people the “evidence of widespread fraud doesn’t exist.”

Some of this year’s election shenanigans involves mail-in ballots. The huge increase in absentee voting provided lots of opportunities to cheat.

The implications are troubling.

Election officials would never have been able to push through the enormous increase in absentee voting without the COVID-19 pandemic as cover. Nor would they have been able justify moving poll watchers behind barricades too far away to properly observe.

The pandemic proved convenient for the deep state and statists who have a long history of using fear as a tool.

Another oddity is the euphoric activity in the financial markets since after the advent of the virus. It has been hard to make sense of surging stock prices, given the economic devastation associated with lockdowns. 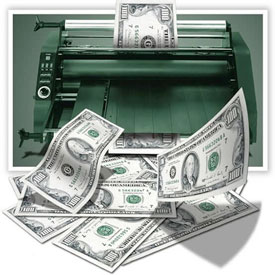 We know that Wall Street bankers have been the beneficiaries of trillions of dollars of Fed largesse and that they are experts at manipulating markets.

Rising stock prices are a nice complement to the media story about Biden winning the election. If Biden is good for markets, he must be good for America.

Narrative control is one context where otherwise incomprehensible stock market action DOES make sense. But what happens if the narrative falls apart?

The deep state may be losing control. If they counted on blind trust in the election system and the media to censor anyone questioning Biden’s legitimacy, they were wrong.

Tens of millions of Americans likely won’t accept Biden regardless of whether he gets inaugurated in January.

If a smooth transfer of power doesn’t happen, investors should be ready for some real turbulence in the markets.

Regardless of who winds up in the oval office, Americans are unlikely to agree on his legitimacy. A lack of consensus on an issue as foundational as which person is in charge of the executive branch is something modern markets have never contended with.

It is just the sort of pin that may eventually prick the bubble in the equity and bond markets. Wise investors are diversifying out of paper assets denominated in U.S. dollars.

Is Silver (finally!) Set to “Cross the Rubicon”?

Bitcoin Defies the Naysayers; Can it Someday Replace Gold?