The Fedcoin Is Coming

Before we talk about Fedcoins, let’s look at the old school non-digital, non-blockchain, coin. Gold. And silver.

Since January 4, the price has dropped about $244. And the price of silver has fallen about $4. Are these buying opportunities? Or the end of the brief gold bull market of 2020 (i.e. Covid)?

It helps to return to the idea that gold is the unit of measure of value. Not as a rhetorical device to sell gold, but because it gives a clearer picture.

If one thinks in dollars, one thinks that bitcoin is rising, stocks are rising (though not this week), oil is rising, other currencies are rising, etc. And gold went up, but is now coming down.

It’s hard to make heads or tails of this. Why would one asset go down when everything else is going up (it’s tempting to want to believe that this one asset is suppressed)? But what if that point of view is not even wrong? What if gold, not the dollar, should be used to measure things?

In this point of view, we’re having another little boom. Everything – as measured in money – is going up. That’s what things do, in booms. They go up. No reaching for a theory is needed.

And we can look for signs that the boomlet is reaching exhaustion. Our preferred sign is the gold basis. So here is a chart going back to the start of 2020, well before Covid-mania. 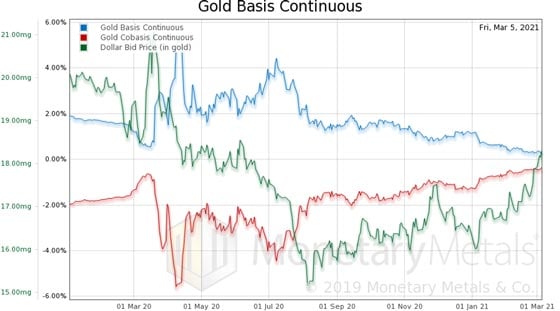 The (continuous) cobasis—the measure of scarcity—is higher now than it’s been in a year (actually since 2016). Notice how it’s been rising steadily as the price of the dollar (inverse to the price of gold, that people insist on measuring in dollars) has been rising.

One could certainly pick a worse setup to buy gold. 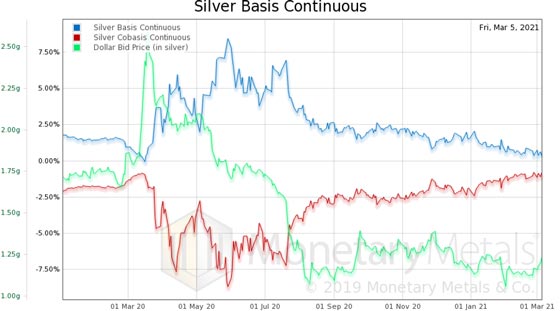 Silver’s scarcity is just about at its high for the year. And the last time, the dollar’s price measured in silver was a lot higher (well over 2 grams silver, compared to 1.2g). The last time it sustained levels this high, the price was over 2.1g (i.e. the price of silver, measured in dollars, was around $14.50).

There are worse setups than to buy silver at this point.

The Fedcoin has bipartisan support. Jay Powell, appointed as Federal Reserve Chairman by President Trump, said in October that the Federal Reserve is conducting research into issuing a digital currency, on its own and also in partnership with other central banks and the Bank for International Settlements.

They give different stated reasons. Powell is more conservative, and his focus is on addressing the potential competitive threat of bitcoin and digital currencies from countries such as China. However, if he really wanted to make the dollar more competitive against the yuan, then he would just abuse the Fed’s credit less.

Yellen nods to a progressive idea, saying that a Fedcoin, “could help address hurdles to financial inclusion in the U.S. among low-income households.” However, if she really wanted the “unbankables” to be able to open accounts, then she would just repeal anti money laundering and other regulations that penalize a bank for crimes committed by its clients.

Both Powell’s and Yellen’s statements are disingenuous. A Fedcoin is coming, because it’s necessary. Allow us to explain the two real reasons. The first is sinister. The second is more pernicious.

The first reason is the pathological fall of interest rates over the last four decades. Interest in the US dollar has not gone negative yet, though it has in the Swiss franc, the euro, the pound, and the yen. Interest will continue to fall.

When the rate goes negative enough, the banks will not be able to hold the line on paying zero interest in deposit accounts. They will be forced to pass through their pain to depositors. This will provide the first incentive to withdraw cash from the banks—thus pulling out capital—since the 1930’s. The paper dollar bill has zero yield. People will prefer zero to negative yield. Free is better than paying to hold your money.

The central banks have three ways to try to fight this. One, they could try to impose losses on dollar bills. They could create an algorithm that deducts from the face value, based on serial number. If they roll this out to point-of-sale devices, then every merchant will know the legal tender value of your cash. That “twenty” could actually be worth $19.93. But this seems impractical and confusing.

Two, they can demonetize cash. People are given until a certain date to turn in their cash for a credit to their bank accounts. After that, the paper will have no legal tender value. But, as Yellen noted, many people are kept out of the banking system.

Or, three, they could issue a Fedcoin and force everyone to trade their paper cash for Fedcoins. Fedcoin would be nothing like bitcoin.

Fedcoin would be programmed to erode at a rate to match the Fed’s negative interest rates. Thus, it would not provide a haven to anyone seeking to hold cash to avoid the erosion of bank balances. They will have you totally trapped.

This is an extension of the same idea behind banning gold in 1933. The people were disenfranchised, unable to opt out of the government’s debt. The most conservative saver was forced to hold government bonds, rather than gold. Indeed, after that, the definition of risk-free asset is the government bond.

After 1975, you can hold gold. But now, it’s not a dollar balance. It has dollar price volatility. Hence, it’s unsuitable for many conservative savers (and financial institutions). If you have a billion dollars of cash, and a liability to pay a billion dollars in two months, then you cannot take the risk on gold. As we write this, the price of gold has dropped $244 dollars since the start of 2021, or about 13% in about two months.

An individual may be able to escape the system by buying gold (or bitcoin), however the dollars are trapped in the system. The seller of the gold (or bitcoin) is the new owner of those dollars. And faces the same awful choice of the tiger or the tiger.

The Fedcoin will be designed to further tighten the noose. Even cash will become entirely electronic, and subject to slow confiscation. Not by inflation. But by negative interest rates that reduce the account balance.

Founder of the Gold Standard Institute USA in Phoenix, Arizona, and CEO of precious metals fund manager Monetary Metals. He also created DiamondWare, a technology company which he sold to Nortel Networks in 2008.