Sometimes you can count on the manipulation conspiracy theorists to get it exactly wrong. Not just a little bit wrong, nor halfway wrong. Not even mostly wrong. Totally wrong, backwards.

Michael Crichton, in talking about the Gell-Mann Amnesia Effect said this:

“You open the newspaper to an article on some subject you know well. In Murray’s [Gell-Mann] case, physics. In mine, show business. You read the article and see the journalist has absolutely no understanding of either the facts or the issues. Often, the article is so wrong it actually presents the story backward—reversing cause and effect. I call these the ‘wet streets cause rain’ stories. Paper’s full of them.

In any case, you read with exasperation or amusement the multiple errors in a story, and then turn the page to national or international affairs, and read as if the rest of the newspaper was somehow more accurate. You turn the page, and forget what you know.”

The headlines blaring about the “disconnect” between paper and physical silver have got it even worse than this. They are, in effect, saying “wet street caused sunshine!”

Paper was bought up at a furious rate, by speculators using leverage. We assume that they are trying to front-run a GameStop-level gain of 12X.

On Monday, this premium hit 50 cents, as we shall see below.

The conspiracy mongers prey on confusion between silver Eagles and spot silver. Retail customers often buy these coins. But coin manufacturing depends on tooling, which is inelastic. It does not increase its capacity when a million retail buyers read an article on Reddit. So the premium for minted silver products can skyrocket.

This is a premium on Eagles, not on silver metal per se.

Miners, refiners, financiers, manufacturers, and warehousemen do not deal in 1-ounce retail products. That would be like looking at the rising price of a cup of coffee in a town that is increasing its downtown zoning restrictions, restricting truck unloading hours, adding more taxes and regulations, and hiking its minimum wage… and thinking that the price of coffee beans in Colombia must be rising.

Looking at the Data 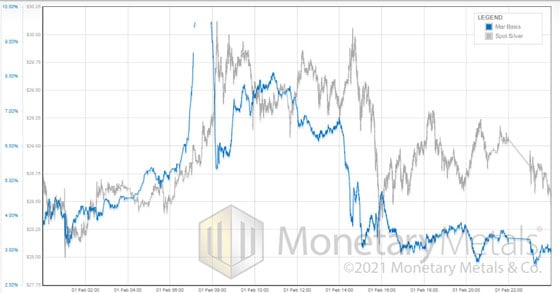 At the peak of the price madness, traders paid such a high premium for “paper” compared to spot that the March contract traded at an (annualized) 10% more than “phys”. That works out to around 50 cents. Now that you have seen this, you know that anyone telling you that metal trades at a premium to futures is either misinformed—or trying to misinform you.

Monetary Metals has the best data, and the best algorithms to remove noise and show the cleanest signal. It took years of careful research and development to create the software to produce these graphs, including a variety of disciplines – not just computer science and software engineering and economics, but also economics and of course gold and commodities markets. Anyone who would dismiss this graph is asking you to trust his feelings and ignore the data.

Note that there is some discontinuity for around an hour early Monday morning (times are GMT). This is not a period when the market is especially liquid, as only Asia is normally active at that hour. However, such was the frenzied pace of trading (mostly buying, obviously) that market makers could not keep up until things slowed down.

At the same time that the conspiracy mongers falsely assure you that the price of “phys” is divorcing to the upside from “paper”, they also mutter darkly about CME hiking margin to hold a futures contract. Margin is set based on volatility. If the price is moving 10% in a day, then there is a risk that the clearinghouse could go bankrupt. So they increase margin, which protects them from this risk. But also means that those buying with extreme leverage must reduce to a slightly-less extreme leverage. And thus sell futures contracts.

If “phys” was launching to da moon, while paper was dropping—why would this be a problem? Why would it matter, if they restrict the amount of paper that can be held with a minimal down payment? How would this affect the price of “phys”, which is divorcing from this paper?

There ought to be a term for when someone offers two arguments, without noticing that one contradicts the other. Either phys is divorcing from paper, or margin requirements for paper is hurting the price of phys. Pick one horse to ride, but not both!

Of course, there is a force, that keeps the prices of silver in the “phys” and “paper” markets tied together. That force is arbitrage. The arbitrageur is buying spot and selling futures like mad. How often do you get to pocket 50 free cents per ounce, just to warehouse silver for two months?

Founder of the Gold Standard Institute USA in Phoenix, Arizona, and CEO of precious metals fund manager Monetary Metals. He also created DiamondWare, a technology company which he sold to Nortel Networks in 2008.